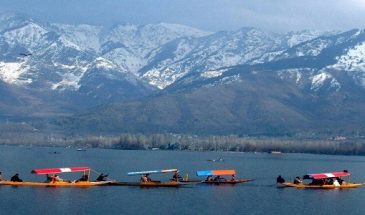 About Destination: Srinagar It is the largest city and the summer capital of the Indian state of Jammu and Kashmir. It lies on…

About Destination: Srinagar
It is the largest city and the summer capital of the Indian state of Jammu and Kashmir. It lies on the banks of the Jhelum River, a tributary of the Indus, and Dal and Anchar lakes. The city is famous for its gardens, waterfronts and houseboats. It is also known for traditional Kashmiri handicrafts and dried fruits. It is one of several places that have been called the "Venice of the East" or the "Kashmiri Venice” Lakes around the city include Dal Lake – noted for its houseboats – and Nigeen Lake. Apart from Dal lake and Nigeen lake city is also famous for wular lake and manasbal lake to the north of srinagar. Wular lake is one of the largest fresh water lakes in Asia.

About Destination: Gulmarg
Gulmarg is a town, a hill station, a popular skiing destination and a notified area committee in the Baramula district of the Indian state of Jammu and Kashmir. The town is situated in the Pir Panjal Range in the western Himalayas.
The resort was named Gulmarg ("meadow of flowers") by Sultan Yusuf Shah of the Chak Dynasty who frequented the place with his queen Habba khatoon in the 16th century. Wild flowers of 21 different varieties were collected by the Mughal emperor Jahangir for his gardens in Gulmarg. In the 19th century, British civil servants started using Gulmarg as a retreat to escape summers in North Indian plains. Hunting and golfing were their favorite pastime and three golf courses were established in Gulmarg including one exclusively for women. One of the golf courses survives and at an altitude of 2,650 metres (8,690 ft) is the world's highest golf course. In 1927, British established a ski club in Gulmarg and two annual ski events were hosted one each during Christmas and Easter. Central Asian explorer Aurel Stein also visited Gulmarg during this period

About Destination: Leh
Leh is a town in the Leh district of the Indian state of Jammu and Kashmir. Leh district, with an area of 45,110 km2, is the second most expansive district in the country, after Kutch in Gujarat. It was the capital of the Himalayan kingdom of Ladakh, seat of which was in the Leh Palace, the former mansion of the royal family of Ladakh, built in the same style and about the same time as the Potala Palace. Leh is at an altitude of 3,524 metres (11,562 ft), and is connected via National Highway 1 to Srinagar. Leh was an important stopover on trade routes along the Indus Valley between Tibet to the east, Kashmir to the west and also between India and China for centuries. The main goods carried were salt, grain, pashm or cashmere wool, charas or cannabis resin from the Tarim Basin, indigo, silk yarn and Banaras brocade.
Although there are a few indications that the Chinese knew of a trade route through Ladakh to India as early as the Kushan period (1st to 3rd centuries CE), and certainly by Tang dynasty.

About Destination: Delhi
Delhi, India’s capital territory, is a massive metropolitan area in the country’s north. In Old Delhi, a neighborhood dating to the 1600s, stands the imposing Mughal-era Red Fort, a symbol of India, and the sprawling Jama Masjid mosque, whose courtyard accommodates 25,000 people. Nearby is Chandni Chowk, a vibrant bazaar filled with food carts, sweets shops and spice stalls.

Qutub Minar: Qutb Minar and its Monuments, Delhi, located to the south of Delhi, is a complex with the Qutb Minar as the centre piece, which is a red sandstone tower of 72.5 metres (238 ft) height with a base of 14.32 metres (47.0 ft) reducing to 2.75 metres (9.0 ft) diameter at the top. Built in the beginning of the 13th century, the complex of structures comprises itineraries, the Alai Darwaza Gate (1311), the Alai Minar (an incomplete mound of the intended Minar or tower), the Qubbat-ul-Islam Mosque (the earliest existing mosque in India), the tomb of Iltumish, and an Iron Pillar. The complex is a testimony to the Islamic depredations during the period as seen from the materials used for building the complex which are those that were removed after destroying Hindu and Jain temples; a shining iron pillar of 7.02 metres (23.0 ft) height (without any trace of rusting) erected at the centre of the complex, with inscriptions in Sanskrit, of the Chandra Gupta II period is a moot witness. History records its construction, initially by Qutubuddin Aibak in 1192, its completion by Iltumish (1211–36) and again by Alauddin Khalji (1296–1316). It underwent several renovations by subsequent rulers, following damage to the structures due to lightning. It was inscribed under the UNESCO World Heritage List under category iv for its unique representation of the Islamic architectural and artistic excellence

Welcome to India- a country where hospitality is a way of life; to a culture steeped in tradition, a land where history lives in music and dance. You will be received at the airport in a traditional manner with garlands and proceed to your hotel.
Delhi at Night
Meals: Nil. Overnight in Hotel at Delhi

Morning transfer to Delhi airport to board flight for Srinagar. Upon arrival proceed to for check in.

After Noon Sightseeing of Mughal Gardens which should take approx. around 1 ½ hrs: Nishat Bagh (Abode Of pleasure), built by Asif Khan Brother in law of Jahangir in 1632 AD, Shalimar Garden

Bagh (Abode of Love) built by Jahangir for his wife Empress Noor Jehan. These beautiful gardens are situated on the bank of Dal Lake with the Zabarwan Mountains in the Background.
PM: Enjoy a Shikara Ride on Dal Lake for around 1 hour visiting Char Chinar, Floating, Vegetable Gardens etc. and Witness Walnut Woodcarving and papier-mâché Making demonstration

About Dachigam Sanctuary
The mountain sides below the tree line are wooded. Most of this coniferous forest consists of broad leaf species. Interspersed between these are alpine pastures, meadows, waterfalls and scrub vegetation with deep gullies, locally known as Nars, running down the mountain face. Most of the grasslands and meadows, except in the harsh winters, are covered with coloured flowers. Located high among its interiors is the Marsar lake from which flows the Dagwan river. This river flows all the way down to, and past, the lower region where it runs along the only proper road in the park and is also known for its fish population, the trout.
Animals to be spotted: Hangul or Kashmiri Stag, Black Bear, Brown Bear, Himalayan Weasle, Yellow-Throated Marten, Jackals, Musk Deer, Brown Bear, Leopards
Best time of the year to visit: Between April and October

After the safari ride at the sanctuary return to Srinagar for lunch. Post lunch drive to Gulmarg
Gulmarg (Meadow of Flowers) at a height of 8800ft above sea level. The drive approx 56 kms will take 1 and half hr with photo stops. One can also have the view of Nanga Parbhat (26,600 ft) if weather permits. Gulmarg has highest 18 whole golf course in the world and has developed into a famous Ski resort. After lunch take a gondola ride (only one phase) from Gulmarg to Kongdoori 10,050 ft high, Evening return back to Srinagar. Dinner and overnight at Hotel.

Morning after breakfast drive to Kargil. Arrive and check-in at the hotel in Kargil for lunch. Post lunch explore the nature around Kargil and relax.
Dinner and overnight in the Hotel.
Meals: Breakfast in Srinagar, Lunch and dinner in hotel at Kargil

Morning after breakfast drive to Leh. En-route visit Alchi for monastery sightseeing and lunch. Evening arrive Leh and check-in at the hotel. Relax for the day and evening take a walk around the market.

Meals: Breakfast in Kargil, Lunch at Alchi, Dinner at Leh. Overnight in Hotel at Leh

The Hemis High Altitude National Park that extends over 600 sq. km. is named after the famous monastery, Hemis gompa that is situated 40 km. southeast of Leh. Located on the west bank of the Indus River, it comprises the catchments of Markha, Rumbak and Sumdah nalas. It is known for some rare species like the bharal and the snow leopard. Hemis has in fact been identified as a snow leopard reserve under a project launched by the Central Government aimed at conserving the species, its prey base and its fragile mountainous home.

Hemis is home to a large number of rare species, found exclusively at these altitudes. The highlights of the area are the rare shapu, bharal and the snow leopard.
Other species include the wolf, Pallas' cat, ibex, Tibetan argali and the Ladakh urial. The bharal and urial populations are especially found in healthy numbers, affording easy sightings.
The avifauna also includes species that are relatively rare in the lower reaches. Some 30 species have been recorded, the most prevalent being the Himalayan Snowcock Tetraogallus himalayensis and the Chukar Partridge Alectoris chukar.

After safari proceed for local sightseeing for the day. Lunch at a restaurant.

Leh Palace is a former royal palace overlooking the Ladakhi Himalayan town of Leh. Modelled on the Potala Palace in Lhasa, Tibet, the palace was built by King Sengge Namgyal in the 17th century.

Shanti Stupa is a Buddhist white-domed stupa on a hilltop in Chanspa, Leh district, Ladakh, in the north Indian state of Jammu and Kashmir. It was built in 1991 by Japanese Buddhist Bhikshu, Gyomyo Nakamura and part of the Peace Pagoda mission
After dinner drive back to hotel for overnight stay.
Meals: Breakfast, Lunch, Dinner. Overnight in Hotel at Leh

Morning after breakfast proceed for local sightseeing for the day. Lunch at a restaurant.
Thiksay Gompa or Thiksay Monastery is a gompa affiliated with the Gelug sect of Tibetan Buddhism. It is located on top of a hill in Thiksey village, approximately 19 kilometres east of Leh in Ladakh, India.
Hemis Monastery is a Tibetan Buddhist monastery of the Drukpa Lineage, located in Hemis, Ladakh, India. Situated 45 km from Leh, the monastery was re-established in 1672 by the Ladakhi king Sengge Namgyal.
Shey is a village in the Leh district of Jammu and Kashmir, India. It is located in the Leh tehsil, 15 km. from Leh towards Hemis. The old summer Palace of the kings of Ladakh is located here

After dinner drive back to hotel for overnight stay.
Meals: Breakfast, Lunch, Dinner. Overnight in Hotel at Leh

Morning in time transfer to Leh airport to board flight for Delhi. Arrive Delhi at 0825 hrs and proceed for local sightseeing with and dinner at restaurant in Delhi

Today we will visit India Gate and drive pass President House and Parliament. Post lunch visit
Qutub Minar in time transfer to airport to board flight back home.

Be the first to review “Wildlife, Ladakh Valley And Kashmir (The Venice Of East)” Cancel reply